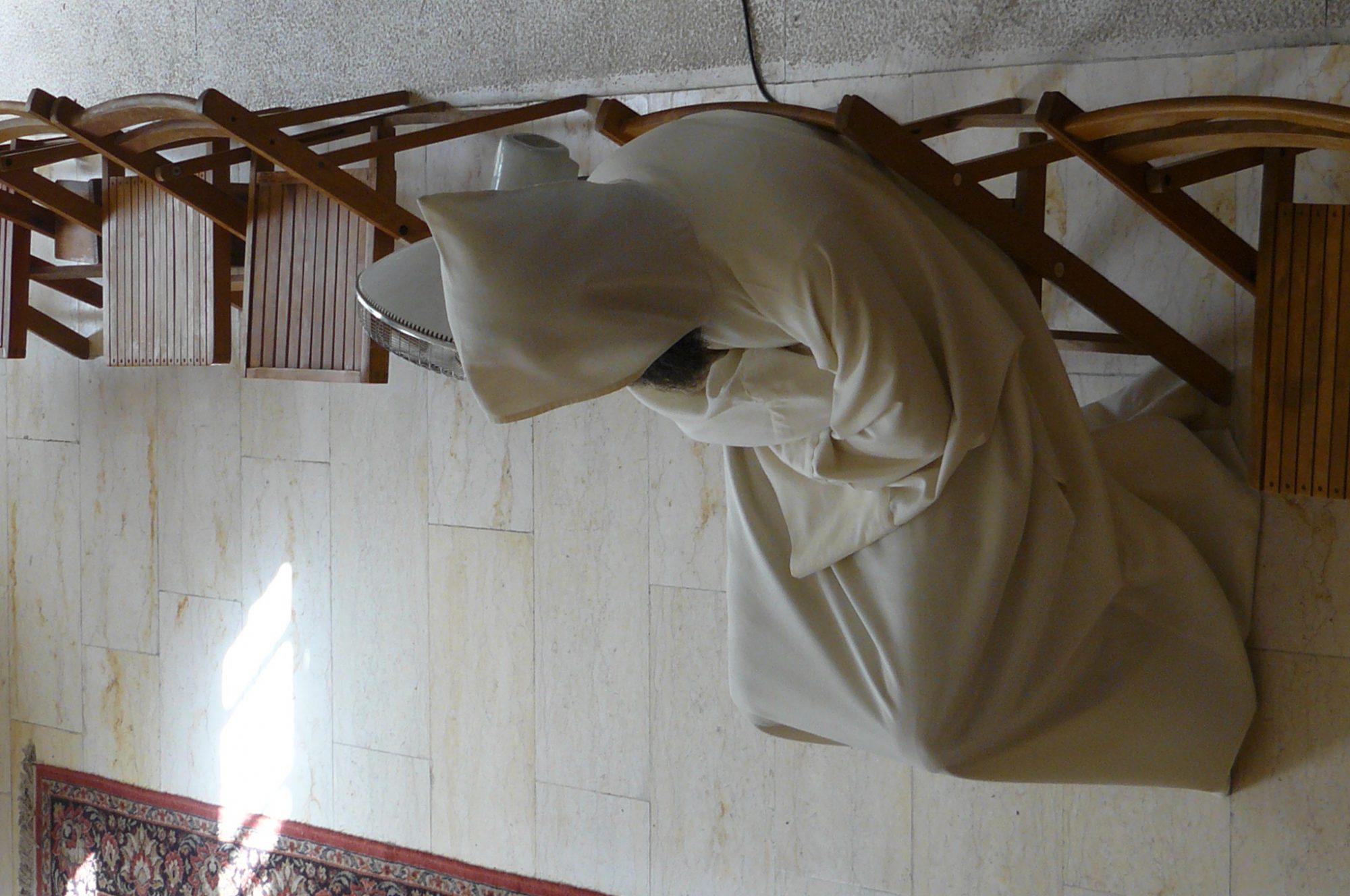 The Jewish painter Marc Chagall (1887, Vitebsk – 1985, Paris) once wrote: “Since my early youth I have been fascinated by the Bible. It has always seemed to me and it seems to me still that it is the greatest source of poetry of all time. Since then I have sought this reflection in life and in art. The Bible is like an echo of nature and this secret I have tried to transmit.”

This Chagallian dream of the Bible bore fruit in the form of numerous works of art, including paintings and stained glass windows. Some of them refer to the motif of blood. Surprisingly, Chagall, a quintessentially Jewish artist, produced numerous images of crucified Christ, thus placing himself within the canon of Christian art despite his assertions that he was representing the martyr’s death of Jesus the Jew. The motif of persecution and martyrdom, therefore, acquires a universal meaning in Chagall’s oeuvre. If blood is the symbol of martyrdom, then what precisely is its significance in the religion and culture of Jews and Christians? Is it only a sign of persecution? Or can we interpret the symbol of blood more widely, allowing an entire gamut of new meanings to emerge?

Blood in the Religions of the Ancient Near East

Blood played a vital role in the religious imagery of the peoples of the Ancient Near East. It was an inherent part of depictions of life and death, of the act of blessing, and of purity and impurity. Some of these images penetrated into the Hebrew Bible, thus exerting an influence on the beliefs of Judaism and its breakaway faction, Christianity.

As early as 2500 years ago in ancient Mesopotamia (subsequently Assyria and Babylon), bloody animal sacrifices were offered to the gods. The custom of substitutionary atonement was already known: when a person was sick, blood was drawn from an animal, which was later slaughtered, so as to offer one life in exchange for another. According to an old Babylonian myth, the god Marduk was killed and humanity arose from his blood.

Muslims also made bloody offerings, both on holy days and during familial celebrations. The worth of a sacrifice depended on the amount of blood spilled. In southern Arabia, burnt offerings were also practiced, mainly to seek favor from a deity. There is an old Arab adage: “blood spilled, threat obviated.” Bloody sacrifices made of animals were also known in Egypt, where the Israelites had spent several centuries in exile, as well as in Canaan, where they were  led by Moses. All of these left their mark on the biblical symbolism of blood.

Blood in the Israelite Beliefs

Already in the formative period of Israelite religious practices, the custom of making bloody sacrifices to God emerged. An animal offered as sacrifice represented both the community and its deity. Hence killing an animal and consuming its meat expressed the idea of being in unity with God. This type of bond with the supernatural was supposed to preserve and prolong human life. With time, sacrifices came to be understood as gifts offered to God. The essence of a sacrifice as perceived by the Israelites lay in offering the life of a living creature rather than burning its flesh. It was more about drawing the creature’s blood (which symbolized the substance of life) rather than letting its flesh be consumed by fire. The ritual thus stemmed from a firm Israelite belief that blood was the essence of human as well as animal life. This assumption was also reflected in the etymology – the Hebrew word for a “man’” – “adam” – contains the word “dam,” meaning “blood.”

It should therefore come as no surprise that rituals connected to blood were performed in ancient Israel on a daily basis. The Jerusalem Temple, erected by King Solomon (tenth century BC) and rebuilt after the return of the Jews from Babylonian Exile (sixth century BC), became the main religious institution. It was there that sacrifices were made according to the letter of the Law. Sacrifices were also made on holy days and during celebrations. The most important was offered by the High Priest (cohen ha-gadol) on the Day of Atonement, Yom Kippur, a day of repenting for sins and begging for forgiveness. It was the only day in the whole calendar when the High Priest entered the Holy of Holies in the Temple and sprinkled it with the blood of a goat while uttering the name of God. It was a way of asking God to remit the sins of all the members of the tribe.

For the Israelites, blood became a vital element of the covenant with God. When making a covenant with Noah, God forbade the consumption and spilling of blood (Gen 9: 5-6). The strict prohibition regarding the consumption of blood stemmed from the notion that blood belonged exclusively to God, the Master and Donor of life. Blood can be offered as atonement: “For the life of the flesh is in the blood: and I have given it to you upon the altar to make an atonement for your souls: for it is the blood that maketh an atonement for the soul. Therefore I said unto the children of Israel, No soul of you shall eat blood, neither shall any stranger that sojourneth among you eat blood” (Lev 17:11-12).

Other religious rituals also involved blood. During the Passover holiday door frames were sprinkled with blood to commemorate the passage of the Angel of Death through Egypt and the saving of Israel’s firstborns who resided in the houses so marked. During the consecration of priests, blood was spilled in the corners of the altar, and the right ear and fingers of the right hand of a priest were smeared with blood to mark his bond with the altar. The Israelite institution of the “avenger of blood” evidenced yet another meaning – according to the Law, if a person had been killed, their closest relative became an “avenger of blood” and was obliged to seek vengeance.

The Christian symbolism of blood is deeply rooted in Judaism. There are three major meanings to the symbol of blood in Christianity: it is a token of the new covenant with God made through Jesus’ death on the cross; it indicates the Eucharist; and it commemorates the thousands of martyrs who have shed blood for their faith. The last notion is shared by Christians and Jews alike. Jewish martyrs for the faith were already mentioned in the Second Book of Maccabees. The tale of the seven courageous brothers and their mother (2 Macc 7:1-42), who were ready to die in the name of the Law, served as comfort and reassurance to the Jews, being scorned for their loyalty to God and adherence to the Torah. The stories of the first Christian martyrs, starting with Saint Stephen (Acts 7:54-60), followed similar lines.

The New Testament co-opts the Israelite conviction that “without the shedding of blood there is no forgiveness” (Hbr 9:22). However, whereas in Judaism “blood” was the blood of offered animals, Christianity speaks of the blood of Christ shed on the cross. Thanks to the sacrifice of Christ, human beings can be reconciled with God and with one another. John the Evangelist expressed the above idea as follows: “But if we walk in the light, as he is in the light, we have fellowship with one another, and the blood of Jesus, his Son, purifies us from all sin” (1 John 1:7).

The same John claims that when Jesus passed away on the cross, one of the Roman soldiers pierced his side with a spear, “bringing a sudden flow of blood and water” (John 19:34). This occurrence was given a very curious interpretation in the writings of the Church Fathers. Akin to Eve, who was the mother of sinful humanity, created from the side of the first man, Adam, the Church, which wields the power to absolve the humanity of its sins, was created from the side of the new Adam – Jesus Christ. The water and blood flowing from Jesus’ heart become symbols of the sacraments of baptism and the Eucharist. The Constitution on the Holy Liturgy, Sacrosanctum Concilium, of the Second Vatican Council states that “from the side of Christ […] there came forth the wondrous sacrament of the whole Church” (no. 5).

The motif of Christ’s blood is also related to the Eucharist. This was announced directly by Jesus himself and noted in the Liturgy of the Eucharist: “Very truly I tell you, unless you eat the flesh of the Son of Man and drink his blood, you have no life in you” (John 6:53). Hearing the words of Jesus, Jews were shocked, as these stood in blatant contradiction to the prohibition written in the Law: “But you must not eat meat that has its lifeblood still in it.” (Gen 9:4). This is also why many of the disciples of the Teacher of Nazareth abandoned him. However, as Paul the Apostle explained, partaking in the Eucharist means being part of the Body and Blood of Jesus Christ. He asked rhetorically: “The cup of blessing that we bless, is it not a sharing in the blood of the Christ?” (Cor 10:16a). Early Christian writers explained the essence of the Eucharist in the same vein. To quote Cyril of Jerusalem (fourth century), who preached – referring to the miracle of the transformation of water into wine – “He changed water into wine, which is akin to blood, in Cana; and shall we not think him worthy our belief, when he has changed [Greek] wine into blood? Do not look upon the bread and wine as bare and common elements, for they are the Body and Blood of Christ, as our Lord assures us” (Cat 4:2.6).

Ultimately, blood in Christianity symbolizes martyrdom. Jesus repeatedly predicted the persecution of his followers. Verbum Dei was to be at the core of animosity towards the Disciples of Christ. The entire Missionary Discourse (Mat. 10) is filled with forebodings of the suffering to be brought about by preaching the Gospel. Right before the Ascension into Heaven, Jesus foretold: “You will be my witnesses” [in Greek: martyrs] (Acts 1:8). And yet a martyr is so much more than just a “witness.” The portents of persecution began to materialize soon after Christ’s passing on the cross. The Acts of the Apostles offer an explicit description of the woes of the rising Church and of spreading persecution. It came to the point that the Disciples of Christ were “rejoicing because they had been counted worthy of suffering disgrace for the Name” (Acts 5:41).

Ancient iconography depicts many saints – particularly martyrs – holding the cross which not only signified the death of Christ but also served as a harbinger of his Resurrection. The first Christians considered martyrdom a gift from Christ, and shedding blood in his name the highest honor. Tertullian, a Christian apologist who lived in the late third and early fourth century, formulated the following rule: Sanguis martyrum semen christianorum – “The blood of martyrs is the seed of Christians” (Apologetics 50:13).

The rich symbolism of blood embedded in the religious practices and culture of both Jews and Christians mainly rests on the belief that blood signifies life. Hence come the biblical prohibition regarding the consumption of blood, the sacrifices offered at the Jerusalem Temple and, finally, the Christian belief that, through the Eucharist, God offers worshippers extramundane life. The Jewish and Christian martyrs believed that blood shed as an offering ushered them through the door to another dimension. That is why Job’s exhortation not to allow blood as a symbol to be forgotten – “Earth, do not cover my blood!” (Job 16:18) – still carries so much meaning.